This year marks the 50th Anniversary of the Pirelli Calendar.  Having worked on this project for the last 20 years we were commissioned by Pirelli Milan to produce a compilation film charting and defining the ‘evolution of an icon’.  Our 50th Anniversary film provided a complete history of the development of the Calendar from the first shoot in Majorca on 1964 right up to the present day.  We also produced a short film to present and ‘un-veil’ The Pirelli Calendar for 2014 – a compilation of black & white images originally photographed by Helmut Newton in 1986 and retrieved from the archive to provide the perfect unique gift for Pirelli’s key customers.   The 50th Anniversary event was held in a dramatic venue in Milan last November and both of our films were the centre piece of the evening’s audio-visual entertainment introduced to a discerning audience by the compere – Hollywood actor Kevin Spacey.

Both of our 50th Anniversary films can be viewed in the ‘Pirelli Calendar’ section of this web site. 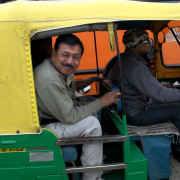 Our drone arrives, and the only way is up!

Shooting in India
Scroll to top